This page contains selected sources of information on martial arts, self-defense, combat sports, and military history that I have found relevant to my work in stage combat.  They are presented here with the hope that they might be useful as background/"fightaturgy" resources for others involved in stage combat (as opposed to those who might be looking specifically for martial arts resources).

That said, none of these materials should be taken as instructional material for stage combat.  I wrote a blog post about the place of such materials in stage combat in February 2012. I also recommend checking out my article, "Nine Pieces of Advice for Martial Artists Beginning Stage Combat Training" in The Theatre Times if you are a martial artist yourself.

I am still deciding on how to structure the presentation of this information, and therefore may be listing websites alongside printed resources and documentaries.  Some contemporary authors also maintain excellent websites, and I am currently grouping those together.  The structure of this list will surely change as I continue to add to it.  Please let me know if there is anything especially important or useful that you think I'm missing.

Click here to go back to Stage Combat Resources.

Click here to read the abstract of my dissertation, Impossible Bodies in Motion: The Representation of Martial Arts on the American Stage. 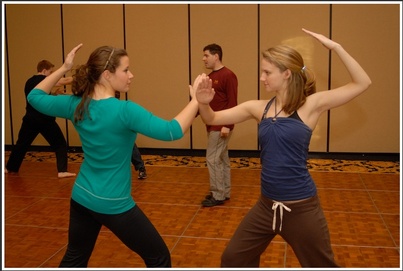 This is a list of resources that cover a wide range of fighting systems.  Some are good reference books, others offer a general introduction to martial arts of numerous regions, still others provide a survey of writings on numerous aspects of martial arts.

Crudelli, Chris. The Way of the Warrior: Martial Arts and Fighting Styles from Around the World

Donohue, John (ed). The Overlook Martial Arts Reader, Volume 2 - Professor Donohue is a novelist as well as a scholar, and I highly recommend his creative work for examples of martial arts in fiction

Green, Thomas and Joseph Svinth. Martial Arts in the Modern World - As if to illustrate the futility of strict catagorization, this book includes a chapter on fight choreography by Tony Wolf

The Journal of Asian Martial Arts

An exhaustive list on this topic would take pages, so I am just listing a few that I particularly like.  I'm including early manuals on sport fencing here as I believe that we have a lot to gain from looking at the continuum of the form as opposed to focusing on specific periods.  I also believe that we should choreograph the sword on the stage, not the one in the museum, but that's another discussion. I am listing European swordplay separately from other martial forms because of its specific place in the study and practice of stage combat.

Baldick, Robert. The Duel: A History - A very interesting book, though it should be taken with a grain of salt

Barbasetti, Luigi. The Art of the Foil

Burton, Richard F.. The Book of the Sword

Castle, Edgarton. Schools and Masters of Fencing: From the Middle Ages to the Eighteenth Century

The Secret History of the Sword Fencing Classics from the Secret Archives of Fencing and Dueling -
J. Christoph Amberger's blog and website

Hutton, Alfred. Cold Steel: The Art of Fencing with the Sabre

Kellerstedt, Burton. Swords and Sabers of the Armory at Springfield - Aside from being a resource on the weapons themselves this volume includes reproductions of US military sabre manuals

Wise, Arthur. The History and Art of Personal Combat

This section is largely dedicated to those who write and teach on the realities of violence outside of the context of sport, entertainment, or military action.  They make for great fightaturgy in that they discuss the moments preceding violence and pre-attack indicators.  They tend to take a pretty holsistic view of the subject, though much of their writing may not sit well with some martial artists.


IMPACT Boston - Boston chapter of an international non-profit violence prevention and self-defense training organization that primarily uses adrenal stress operant conditioning.  (I was an instructor for this organization for several years and wrote an article on the experience.)

Langsner, Meron: "Simulated Assault: My Life as a Self-Defense Instructor" - My article on The Good Men Project about working for IMPACT.

Rory Miller: Chiron Training - His website and blog.  I highly recommend this man's writing.  Miller (along with Marc MacYoung (also on this list))  is among the best writers dealing with violence today.

Some books by Rory Miller:

Marc "Animal" MacYoung: No Nonsense Self Defense - His website, which links to many of his books - Mr. MacYoung has done more writing on the subject of violence than is reasonable to list here.  All of which is potentially very useful for a fight director.

Massad F. Ayoob: Among the most respected authorities on modern firearms training.  Hyperlink is to his Amazon author page.

Silveira, Luciano. The Moment of Truth: How to Physically, Mentally, and Legally Survive a Street Fight. (DVD) - One of the better videos out there on the reality of street violence.

I expect to expand this section quite a bit.

Here I'm presenting books, websites, and articles dedicated to a single system, or an aspect of one.  I have yet to decide how to categorize them (whether by type, region, or otherwise).  The idea here is to provide a starting place for fight directors (or dramaturgs) intending to research a specific form.

Websites are to headquarter schools and/or organizations of specific systems.

Clarke, Michael. Shin Gi Tai: Karate Training for Body, Mind, and Spirit - There is an in-depth review of this book on my blog

Craig, Darrell. Iai: The Art of Drawing the Sword

Draeger, Donn F. - This man wrote or co-wrote fairly good books on several martial arts.  The hyperlink is to a WorldCat author listing.

Langsner, Meron. "A Performance Theory Analysis of the Practice of Kata in Karate-Do: Self Resolving Contradictions of Ritual, Spontaneity, Violence, and Morality." EJMAS

Dr. Yang Jwing-Ming - More great books and DVDs on Chinese Martial Arts than I can reasonably hope to list.  Also check out the webpage for his organization, YMAA.

Zarrrilli, Philip. When the Body Becomes All Eyes: Paradigms, Discourses, and Practices of Power in Kalarippayattu, a South Indian Martial Art

This is another section that has quite a ways to expand.

These may be of as much use to designers and dramaturgs as they are to fight directors.

Boot, Max. War Made New: Weapons, Warriors, and the Making of the Modern World

Grossman, David, Lt. Col. On Killing: The Psychological Cost of Learning to Kill in War and Society

Keegan, John. The Face of Battle

Metropolitan Art Museum Arms & Armor Department - Placing this link here though this collection is rather expansive and covers many subjects in the field.

McNeill, William Hardy, Keeping Together in Time: Dance and Drill in Human History

These are books, articles, and websites that are potentially very useful in fightaturgy but do not fit into any of the above categories.  I also expect to add much more to this section as time goes on (and perhaps have other sections grow out of it).

Auguet, Roland. Cruelty and Civilization: The Game of Death in Ancient Rome

Balisong.net - Website on butterfly knives Technically this might fit in with Filipino Martial Arts, but the advanced manipulation of butterfly knives has evolved into a skill more akin to juggling than fighting.

CorrectionsOne.com - Website catering to correctional officers and administrators.  There are several articles on improvised weapons that can be useful. For example:
https://www.correctionsone.com/contraband/articles/2030082-8-real-and-lethal-prisoner-made-shivs/

Article Jujutsu on the British Stage circa 1911

McCaughey, Martha. Real Knockouts: The Physical Feminism of Women's Self Defense - A Sociology/Women's Studies professor's ethnography of women's self-defense in the late 1990s.

There are those who would be offended that I am including pro wrestling on this page.  If this were strictly about martial arts, they would be right. But as this page is about systematized violence that may be useful for those involved in stage combat, this is the best place to include these resources.   An academic colleague of mine argues rather convincingly that professional wrestling is in fact a genre of theatre in and of itself.  I know of two dissertations in progress on pro wrestling and look forward to including them on this page when they're completed and available to the public.

"How Pro Wrestling Works" from HowStuffWorks

Chris Maverick's Wrestling Page - An old friend of mine who happens to be a part-time professional wrestler. 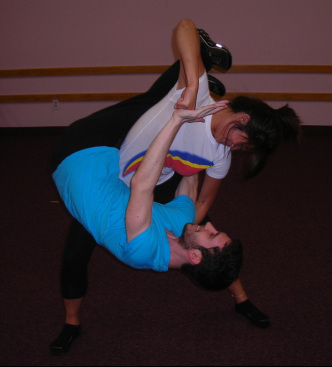 SOME PLAYS THAT INCLUDE MARTIAL ARTS SCENES

There are far more than I am listing here, but this should give you some idea of what's out there.  Please let me know if you feel I'm missing anything important here (published plays only please).

Nguyen, Qui.  The vast majority of his work.  Especially with the Vampire Cowboys.  Some of his plays include Soul Samurai, Living Dead In Denmark, and Aliens Vs. Cheerleaders. (You name the martial art, it's in there somewhere)

A small handful of my own plays contain martial arts.  Please browse my Plays Available page for details.